What does Telomere Testing measure?

How are the results reported?

What do the results mean to the patient and the doctor?

There are trillions of cells in our body and at any given time a great number are dividing furiously to keep us alive and well. The process is directed by genes sitting on the 23 pairs of chromosomes found in the nucleus of each and every cell. The chromosomes are long sequences of DNA that contain all our genetic material. Each pair of chromosomes consists of one from your mother and one from your father and they are twisted around each other to form a structure called the double helix.

Of particular interest to the scientists at T.A. Sciences are the ends of each chromosome known as telomeres. Telomeres have no genetic function; they are simply stretches of DNA (repeats of base pairs) that protect the rest of the chromosome. These little bits of DNA are critical to healthy cell function and have been likened to the plastic tips on shoelaces because they prevent the chromosome from "fraying." 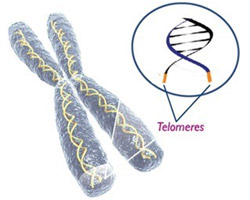 However, telomeres become progressively shorter each time the cell divides. When they get too short, cells reach replicative senescence and can no longer divide. The result can be the various conditions associated with old age.

Scientists have only recently begun to understand the critical importance of shortened telomeres. Research has shown that people over sixty who have long telomeres experience greater heart and immune system health than their age-matched counterparts with shorter telomeres. Thus, it is becoming well-understood that maintaining telomere length is preventing age-related decline.

The phenomenon of cellular aging was first noted by Professor Lenhard Hayflick in 1961. He discovered that cells cannot divide beyond a specific number of times. This is called the Hayflick Limit. Cells reaching this limit become old. Although Professor Hayflick discovered this important scientific principle, he had no idea what caused it.

It took almost thirty more years before the role telomeres play in cellular aging was finally understood. In 1990, Calvin Harley at McMaster University in Canada and Carol Greider at Cold Spring Harbor Laboratory in the USA discovered that telomere shortening goes hand-in-hand with the aging process and is the direct cause of cells reaching the Hayflick Limit.

What are the nutritional implications on telomere length and repair?

What lifestyle modifications are likely to be helpful?

One should achieve ideal body weight and body composition with low body fat (less than 22 % for women and less than 16 % for men). Decreasing visceral fat is very important. Regular aerobic and resistance exercise for at least one hour per day, sleeping for at least 8 hours per night, stress reduction, discontinuation of all tobacco products are strongly recommended. Bioidentical hormone replacement therapy may decrease the rate of telomere loss.

When should retesting be considered?

Testing should be done once per year to evaluate the rate of aging and make adjustments in nutrition, nutritional supplements, weight management, exercise and other lifestyle modifications known to influence telomere length.

What role will nutritional supplements play in slowing telomere shortening?

Oxidative stress will shorten telomere length and cause aging in cellular tissue. Antioxidant supplements can potentially reduce oxidative stress very effectively, which will ultimately improve oxidative defenses, mitochondrial function, reduce inflammation and slow vascular aging. Targeted supplementation is key, as antioxidants work synergistically and must be balanced to work most effectively and avoid inducing a pro-oxidant effect. Increasing antioxidant capacity at the cellular level is critical to maintaining telomere length.

Recent evidence suggests that a high quality and balanced multivitamin will also help maintain telomere length. Specifically, studies have linked longer telomeres with levels of vitamin E, vitamin C, vitamin D, omega-3 fatty acids and the antioxidant resveratrol. In addition, homocysteine levels have been inversely associated with telomere length, suggesting that reducing homocysteine levels via folate and vitamin B supplementation may decrease the rate of telomere loss. Similarly, conditions such as cardiovascular disease, insulin resistance, diabetes, hypertension, atherosclerosis and even dementia affect telomere length. Correcting subclinical nutritional deficiencies that may contribute to such diseases is crucial for telomere maintenance.

Telomerase Activation works on targeted cells in your body and can improve not only cell longevity but quality of life. A double-blind, placebo controlled study of TA-65® showed improvements in:

Learn more about the new world of telomerase activation as a method to intervene in the aging process. Understand how taking TA-65 may improve your health and vitality. Find out your real biological age by testing your biomarkers of aging and measuring the length of your telomeres.